‘Are you ready for this?’

A few people asked me the question as they arrived at the church for my son’s wedding. I didn’t know what to say. ‘No’, wasn’t an option, nor was it true. ‘Yes’, wasn’t completely right either. I had a whole load of emotions churning about as we waited for the ceremony to start. I felt for Sam as he waited in the church, excited, nervous. I tried to hold the tears in, but seeing Jess arrive, wiping the tears from her eyes as she chatted to her Dad in the car, started me off.

Ready wasn’t the right word. To be honest, I’ve not been ready for many things in this parenting lark. Each age and stage requires learning and adjustment, and a whole dollop of getting on with it, covered by even more prayer. A wedding is no exception to this. Sam and Jess spent their engagement preparing to be married. Us as parents, prepared not only for showers, the rehearsal dinner and the wedding day itself, but to let go of these beautiful children of ours and let them start their own adventure together. How can you ever be ready for one of those moments?

Thankful is the right word. In the foyer, waiting, I knew this time I got to be Mum of the handsome groom waiting for his stunning bride, and I was and still am thankful. Thankful to get to this point and get to see such a joyful thing happen in my son’s life, and indeed ours. 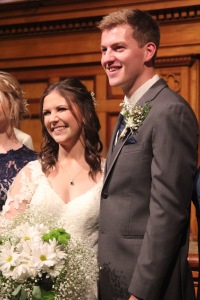 Thankful God gave him to us.

Thankful the bump on his head at 25 days old did not do any lasting damage. (Fall from a countertop, three days in children’s hospital, four inch skull fracture, CT scan, traumatized parents.)

Thankful the other subsequent bumps on his head didn’t either. (Two pebble throwing accidents, a fall into a bedside table and a knock on the head from a spade, none of which we were involved in!)

Thankful he made the decision to follow Jesus himself.

Thankful Sam is such a great big brother, and was the first one born fortunately for him, followed by three sisters.

Thankful, though he cried buckets when we told him we were moving to Canada, he adapted to life here so well, and later told us, ‘Good decision!’

Thankful for the guys in our church family who became role models and friends to him, and for his wider group of friends too.

Thankful he is a willing and hard worker and has done so well in his electrical training.

Thankful he learned to drum and uses his drum kit to worship God, and sometimes to let off steam.

Thankful he’s great to be around.

Thankful he met and fell in love with Jess, a follower of Jesus also.

Thankful they decided to get married and commit to each other. This is a bold step for a young couple in this day and age. Thankful they have friends around them who are on the same journey, and together they can encourage one another in their experiences, as well as learn from old hands. Just like we did.

There are so many things I am thankful to God for, but one I must mention, I am so thankful to now have a daughter who loves Shakespeare and Jane Austen as much as I do, if not more!

Today, a few days on from the wedding, relaxing on a beach, I watched a group of four kids, a brother and three sisters, playing in the sand. They were running, cooperating, then fighting, shouting, ‘Mummy!’ now and then. It was tempting to get a bit sentimental and reminisce about when our kids played together on a beach – we did talk about it a bit. ‘Remember when…’ I also remembered when everyone got tired and hungry walking home, getting sand out of everyone’s hair and assessing the sunburn damage. I was tempted to walk over and give the Mum a hug, tell her to enjoy every minute of this, and for goodness sake go and play with them a bit. They were having a great time playing on their own though if I’m honest.

In the end I’m thankful we had all those fun times, but life goes on. The fun changes as our family grows.

My prayer for my son and his lovely wife is they will enjoy and serve each other, follow where Jesus leads them and in everything be thankful. Thankful for each other and for every day they have together in this life…and be ready for the unexpected, relying not on their own strength, but God’s, to get them through.