This past week I’ve been in New York – Brooklyn to be precise, at Metro World Child with a team from our church family. When I’ve read about Brooklyn in tourist books and articles before it’s all about the upcoming neighbourhoods, the hipsters who have been moving in there. We didn’t go there for that or the sights of Manhattan (though we saw a couple). Some areas are improving, but there are many parts of Brooklyn and all over New York City that are still very poor and deprived. Areas where drug dealing, guns and gangs are a daily reality. This is where Metro works. We travelled there to learn, and take part in the boot camp and experience what they do.

So, in the last few days I’ve walked into housing projects in Brooklyn and the Bronx where low-income families are packed into tiny apartments. I’ve had the privilege of visiting with them and chatting to the kids. One place I was taken to had recently had the largest take down in New York City – over one hundred people arrested during the same night by a police and FBI operation. Now many families in that project have someone in jail, the kids witnessed doors being broken down and their fathers, brothers and other relatives taken away. The kids in these places have seen and/or experienced many things they should not be exposed to whether it is physical or sexual violence, neglect, abuse or hunger. They are ‘hood kids. They are on alert, in survival mode and often behave older than their age. Often the apartments are filthy, because a lot of the families just don’t know anything else. These families’ lives are a struggle.

Yet when we stood outside schools to hand out fliers for the Sidewalk Sunday Schools that Metro run in 200 sites across New York every week, and the three big indoor sessions that they run at their church building on Saturday, many kids come up and hug or high-five us. Many people know and respect ‘yogi bear’ – the nickname that the people in these communities have given Metro’s ministry. The t-shirts and sweatshirts with the logo on are dubbed our ‘bullet-proof vests’. There’s a lot of respect for this organisation that has served the city consistently for many years.

This is not glamorous work, it requires dedication and persistence. All the staff, interns and volunteers I met are passionate about what they do – passionate to give hope to each child they meet and to show them the love of Jesus in very practical ways. They show up, they give their lives. They’re in these neighbourhoods every week, they spend time with families. Every day after we took part in other work projects in the morning, we were involved in some way from just after noon until sometimes 8.30pm, visiting, or blitzing the buildings with fliers or helping with Sidewalk Sunday School. One day I was taken around several areas in the Bronx, roughly an hour and a half’s journey on the subway from Brooklyn, with Paolo a young member of the staff at Metro, originally from Italy. He loves those communities and the people in them and with the team has built up relationships with not only the kids, but schools, community centres and others in the area. Everywhere we went kids ran up to him, hugged him and wanted to hang out. He knew what was going on in their lives, because he’s there all the time. It is a similar story in all the areas where our team went to. They have some amazing stories.

My heart broke going into those buildings. It wasn’t that I was surprised by what I saw, but it is always shocking to realize that people live like this day in and day out, just a stone’s throw from the incredible wealth of the Manhattan area. I met such sweet and bright children who face incredible challenges, and require a lot of encouragement, to get through school and avoid falling into the same pattern of crime and trouble that others do. When we walked back to the subway station I wanted to weep. It was hard to leave them.

The week ended with the experience of the indoor programme on Saturday. There are three sessions of their Saturday Sunday School. Buses pick up the kids from their buildings all over the Brooklyn area and bring them to the building. It’s a huge operation to get between two and four thousand-ish children there every week. Some of the bus routes take over an hour – so that’s an hour picking up then an hour dropping them off after, before picking up the next load for the next session – and so on through the day. These are not easy kids so it is quite an experience on the buses to keep order. I did have some lovely times chatting to a few little girls, playing games with them and talking to them about all sorts of things. One bright-eyed seven-year old girl pointed out churches and other places where her family go to get a good meal. My heart ached.

When they’re in the sessions, it is amazing. All these tough kids with their attitudes and problems have a blast. For a while on a Saturday they are allowed to be kids. The format is fast paced, and everything is in the same order every week. The kids know what is coming next and what to expect. It’s a whole lot of fun with games and music and noise, then when the lesson starts there is absolute order and silence. It was amazing seeing how this works with hundreds of kids.

For one session I sat next to a few girls who had such attitude all the way through the first half yet were the ones who listened and responded during the lesson. Some girls on the bus told me that the lesson is their favourite part – along with the games of course. These kids really listen. They also know that the people at ‘Yogi Bear’ care for them.

For the last session of the day our bus arrived late so I was put way up in the back corner. I could see across the whole auditorium full of kids right up to the stage. It was quite something to see so many of them really going for it during the worship time. Another emotional moment, and a moment when the Holy Spirit really tugged at my heart.  I felt God speaking to me, along the lines of, ‘Are you willing then?’

To make a difference takes more than talking. It’s weeks and years of work and sacrifice, it’s being in it for the long haul. It’s a cost to be counted and an adventure to be taken. What joy though to see even one kid’s life turned around. This was pinned up at the centre – I wonder if I’m ready for that. I pray so. 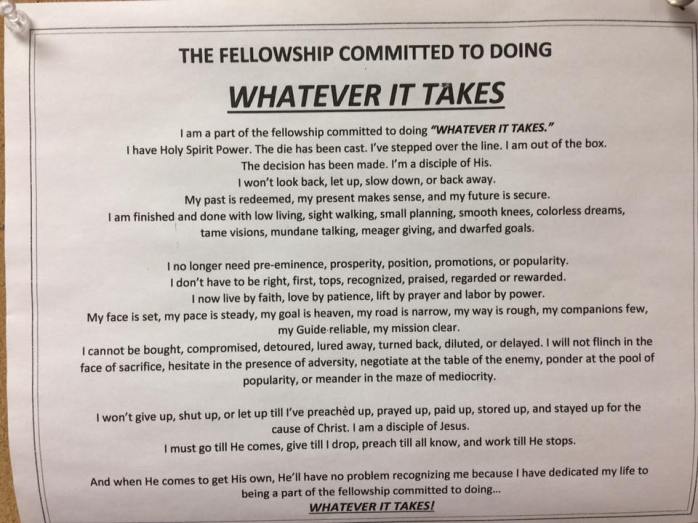