Here I am. Back! We have emerged from the long, cold, snowy winter at last. 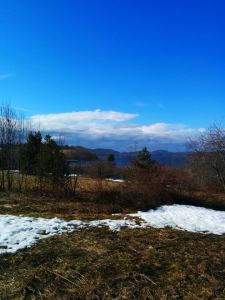 Grass is visible, if a little yellowy-brown in colour. Shoots are coming out of the ground. I went for a run on actual pavement. There have been at least two days so far where I haven’t had to wear socks. Bikes are being fished out from the back of the shed. The deck furniture is out. Things are moving in the right direction. I’m looking forward to cooking on the barbecue and eating outside, hopefully before the black fly and mosquito start descending on us, and getting started on the vegetable garden.

I thought an update is in order as I’d gone quiet on that score. As a family I think we went into survival mode during the winter. Get out, get done, come home, get warm. It’s a bit like that. By the last snow storm we had all had enough. I didn’t even bother hiding easter eggs outside this year as we still had deep, deep snow (yes, I do still hide them at the children’s request). Just as I thought I couldn’t take any more the temperatures went up and the snow started to melt. A couple of weeks on and it has almost all gone. Yippee!

Some great things happened in the last week or so. Our eldest Sam, who is at college studying Electrical Construction, entered a Skills NB competition. He competed as one of ten in the electrical competition, having six hours to wire a mock room with a panel sockets and so on. He came fifth. The first three places went to third year apprentices, the fourth to his friend Sam who is a year ahead of him and then Sam. He beat the other NBCC college students in the competition which he wanted to do, so he was very happy! He won an array of tools and some very over-sized t-shirts. Only a month to go and he finishes at St Andrews and will move home again, and start his apprenticeship.

Lois found a prom dress. Let us not rush past this point. Months of pressure, frustration and tension have been relieved. High school graduation year is a busy one with many dates on the social calendar, all leading up to grad week. Being a ‘Grad Mom’ to a girl is a whole different level from my experience last year with a son.

Last year, Sam had one outfit he wore to almost all the grad events and then hired his suit for prom. For girls it’s a new outfit and shoes for each event, and the prom dress is a big, big thing. The school has a members only Facebook page where they can post what they’ve bought so no one else buys the same dress. Lois spent months looking on websites for the perfect dress, and most of those shipped from China or the States meaning import duties as well as the uncertainty that the dress would be as the picture showed. Needless to say I felt like the biggest meany ever saying no to a $500 dress from a reliable website. Time ticked on and we thought we’d left it too late and then she found one in a store here in Fredericton. Oh the joy!

One of my other daughters who wishes to remain anonymous came third in a provincial essay writing competition. She wrote the essay as a normal class assignment, but then her English teacher suggested that she submit it for the Turning Points competition. A few weeks later her English teacher called us to say that she had come third, winning $150 and that her essay will be published. Fantastic! Of course we are so proud of her, but she dislikes the attention that this has brought! I will say no more…for now.

The youngest is still enjoying Pippin, the guinea pig, the star Christmas present who seems to grow larger by the day. Pippin get regular tours round the house in an old Barbie car. Recently, she (the guinea pig) was the subject of a slam poem for school. Issie had to present it to the class – always an ordeal for a Grade 6-er. She did it though, in the end. Presenting is not a well-loved activity for any of mine. Tim says they have his genes when it comes to that.

We enjoyed a great time together with people from the UK and around Canada at church in the middle of the month. Jeremy and Ann Simpkins and Dave Fellingham were here and provided some excellent teaching and great encouragement for the whole church. We got to spend some time with our friends, Andrew and Janet Dreise, who are planting a church in Charlottetown. Special times.

Tim is back to work. The hard slog begins again. Fortunately, or unfortunately, rainy days have punctuated the last week or so, easing him back into physical work. After having him around to be home for the children after school and to do jobs around the house, it is an adjustment. We never know whether he’ll be home at 5pm or 8pm. It depends how big the roof is for that day, which makes planning things in the evening a little tricky and sometimes a little tense…much grace required. 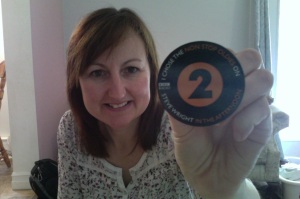 Finally, two months ago my non-stop oldies were played on Steve Wright in the afternoon on BBC Radio 2 in the UK. It was one of the highlights of the cold month of February. Today the badge came in the post, at last! It took two months and only just got here as the envelope had split and the badge was falling out. It’ll go with one other badge in my collection – a Blue Peter badge.

April has passed by in a blink…tomorrow is May. One of my children asked, ‘Will you do post a day in May again?’ Mmmm…we’ll see.