My first whole week off in a year. So exciting.

It’s a dream of mine to drive across the States, actually maybe across Canada, down the West Coast to California and then wind back right across the United States – with time to stop and enjoy places. Like I said, it’s a dream. I like to travel and to be in new places. I had to settle for four days and four States this week. After driving last Sunday on our way to Connecticut and a visit to Six Flags New England theme park with what seemed like every Bostonian and New Yorker heading home from Maine, flying seemed a little more appealing. Driving on the Interstates can be like an adrenaline pumping roller coaster, among a sea of SUVs and huge trucks hurtling along at surprising speeds – until the junction for a turn off to New York comes and everything crawls along for an hour, or in Connecticut the police suddenly block off two lanes so they can search the hard shoulder for something and everyone tries to push into one lane all at the same time. I was a little scared at that point. We played a game spotting as many different State number plates as we could. We counted twenty-one in all through the whole trip – the furthest travelled being Texas.

We don’t have GPS so I relied on Google Maps directions which is okay on the big routes, but we got lost trying to find our hotel. We ended up in a pretty village instead of near an airport. I was glad I’d added US roaming to my phone so I could phone the hotel to ask for directions. We were all thankful for ordered in Dominoes Pizza once we did get there and hotel room coffee never tasted so good. It was the first time for a long while that I’ve slept with all my children in the same room, that probably won’t happen again for another long while. Anyway, we did the theme park the next day in sweltering heat and among crowds of people. It’s a shock to the system after living in relatively quiet Fredericton. We did manage to get to go on a few of the thrill rides. Batman was the favourite. Then for the next couple of days we travelled home and did a bit of shopping, and, one of the highlights, ate at a Chilis restaurant. All of us at some point in the trip said, ‘It’s a shame Tim/Daddy is not here.’ He had to work. 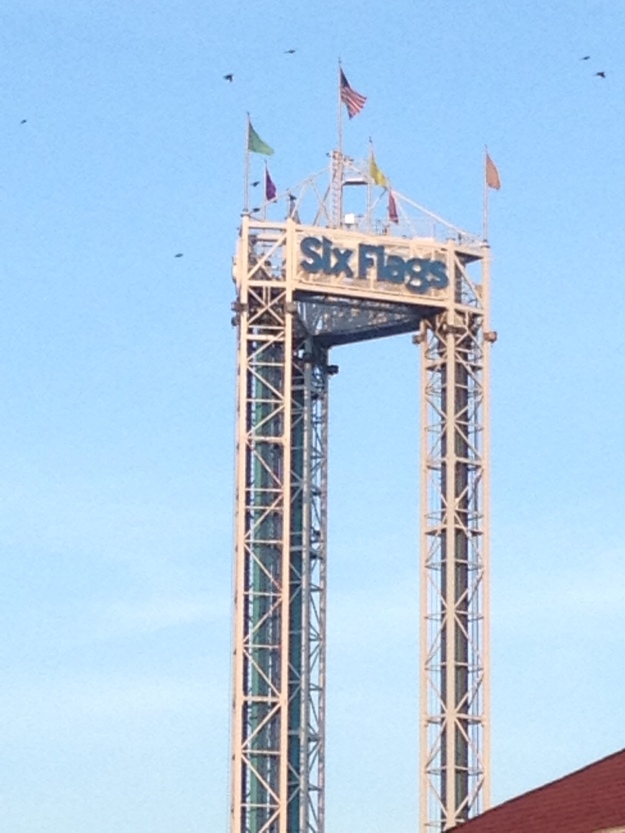 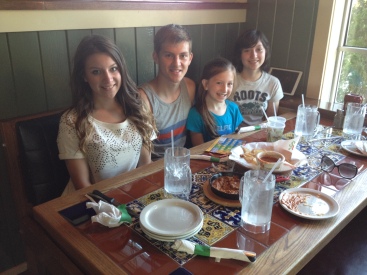 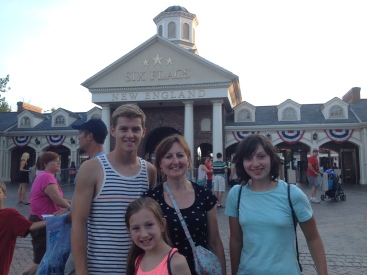 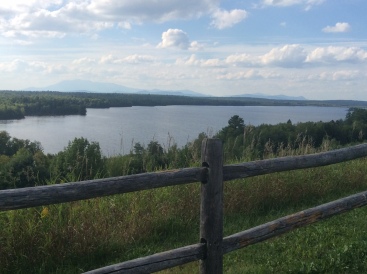 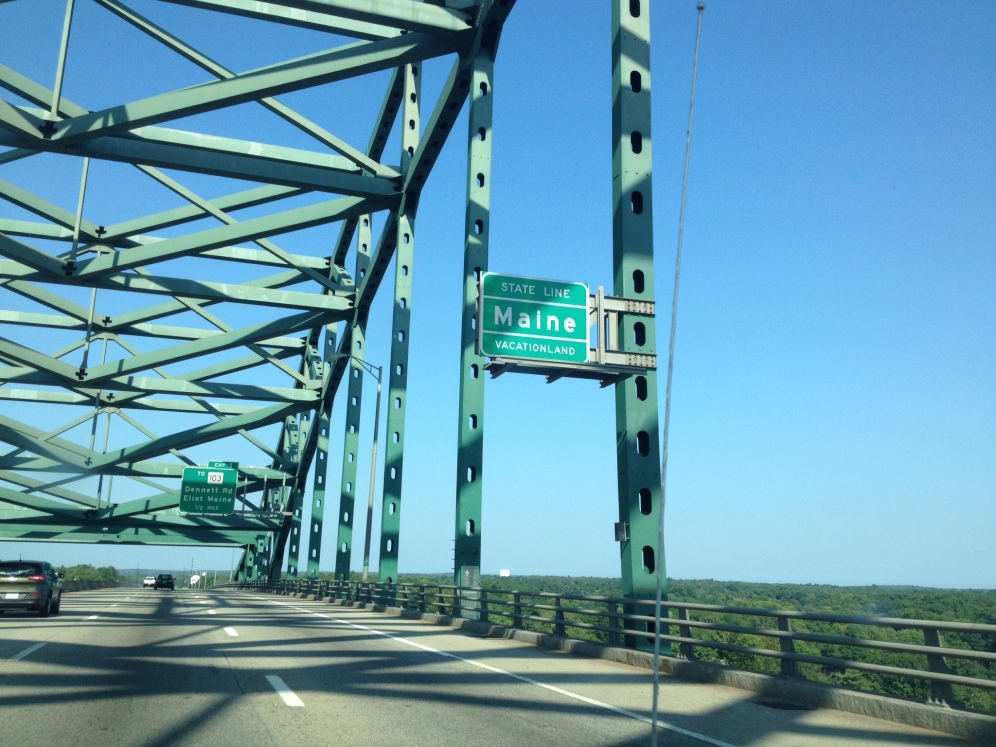 We got back from the US on Wednesday night in time to watch the next episode of ‘The Great British Bake Off’. Dessert week. The bakers made self-saucing puddings (yum), a variety of Baked Alaska’s for their showstoppers and for the technical challenge, Tiramisu Cake. Great, I thought, our neighbours are coming over so that would make a great dessert.

If I had known before I crossed the border that I would need mascarpone cheese for this week’s challenge I would have bought some over there. Mary Berry’s Tiramisu cake could be a contender for most expensive dessert ever if you live in Canada. A small tub of mascarpone sets you back about $6.49 and the recipe requires 750g – 3 tubs! Plus there’s brandy in there and double cream. That presents a problem as there is no double or heavy cream here. Whipping cream has to be the substitute, but it doesn’t have as high fat content so the results can be a little different. There was no way I could buy mascarpone so I looked online for how to make it using cream cheese. I found a good recipe here which I used. I did have to add a little more icing sugar to it as the cream cheese and sour cream make it a little sharp, but it worked.

My square tin was too big so I had to fashion an insert with cardboard to make the 7 inches required. 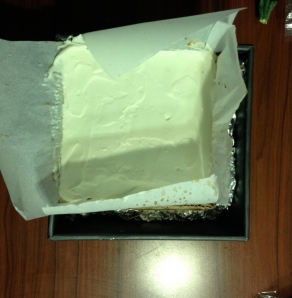 The end result was fairly good – slightly uneven layers because I rushed putting the thing together. Don’t think I’d come first in the technical challenge, but we liked it. I ate a good number of the extra chocolate flowers too. In the background you can see my neighbour Sue’s blueberry crisp – also very delicious. 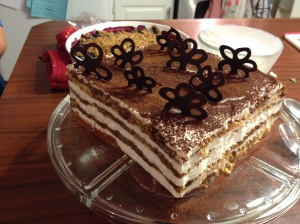 Next week brings back to school, back to work and pie week. Bring it on!